Just a gentle reminder to everyone that my first book Hill Country Landscapes is back in stock and available for immediate shipment. You can preview the book below to see some of the wonderful landscapes you can find in the Texas Hill Country.

Hill Country Landscapes by Jeff Lynch | Make Your Own Book

My next book should be completed in the fall and be available before Christmas, so stayed tuned!

Here’s another shot taken from the top of the rise overlooking Cougar Canyon in the Hill Country State Natural Area. It was a tough climb under very hot conditions but the view was well worth it. This is definitely a spot to return to for a sunset shoot later this year. 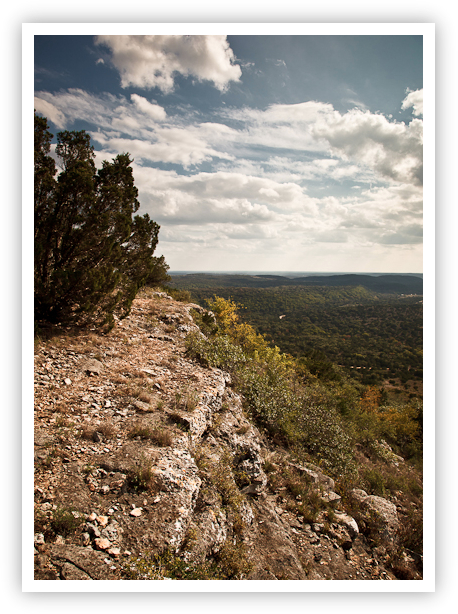 Hill Country Hillside – Bandera, Texas
Copyright © 2009 Jeff Lynch Photography
Shot taken with a Canon EOS 5D Mark II set on aperture priority (Av) using an EF 24-104mm f/4L IS USM lens hand-held. The exposure was taken at 24mm, f/11 for 1/100th of a second at ISO 100 using a Singh-Ray warming polarizer. All post capture processing was done in Adobe’s Lightroom 3 Beta 2. Click on the image above for a larger version.

Happy Monday Morning! If you’re anything like me the thought of facing Monday mornings falls somewhere between having your wisdom teeth removed and paying your monthly bills.

So here’s a shot I took while hiking Hill Country State Natural Area with my oldest friend in the world (and the god-father of my first daughter), Jack Alberts. Jack reminded me a few weeks ago that I’d unintentionally slighted him in the introduction of my first book, Hill Country Landscapes, by neglecting to mention his part in my photographic exploits last fall.

To set the record straight, Jack was the “driving force” (inside joke) behind many of the best shots presented in my book and when I say he is “my oldest friend”, I’m being quite literal. If it weren’t for Jack I’d never have hiked straight up the 400 foot face at Garner State Park, gotten some truly wonderful shots and then spent the next several hours finding a safer route down. My ego just couldn’t let a friend fifteen years my senior, leave me in the dust of his well worn and taped (another inside joke) hiking boots.

I also would never have gotten this shot, taken at the trail-head of Cougar Canyon on a hot, autumn afternoon. So to my oldest and dearest friend, here’s to you Jack! 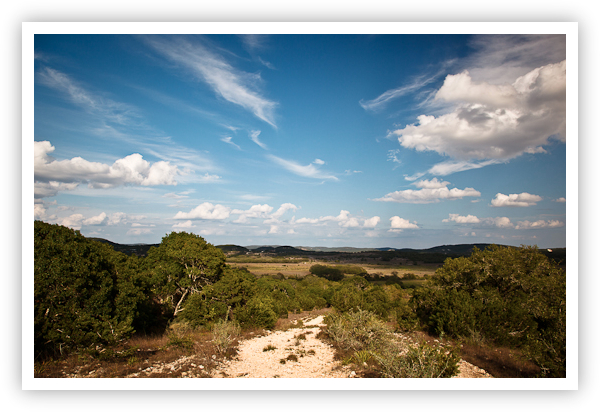 Open Sky – Bandera, Texas
Copyright © 2009 Jeff Lynch Photography
Shot taken with a Canon EOS 5D Mark II set on aperture priority (Av) using an EF 24-104mm f/4L IS USM lens hand-held. The exposure was taken at 24mm, f/8 for 1/125th of a second at ISO 100 using a Singh-Ray warming polarizer. All post capture processing was done in Adobe’s Lightroom 3 Beta 2. Click on the image above for a larger version.

Here’s a shot I took a few months back during a hike at the Hill Country State Natural Area near Bandera, Texas. This secluded little state park boasts about 40 miles of hiking and horse trails winding up and down grassy valleys, crossing spring-fed streams, and climbing (very) steep limestone hills.

It’s also one of most beautiful outback areas of the state and offers wonderful vistas to photograph for those adventurous enough to hike up the rough limestone trails. It’s one of those spots that nature lovers prize the most; secluded, quiet and beautiful. 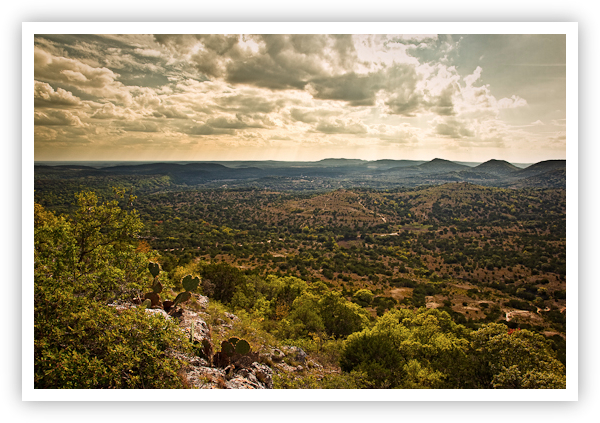 Long Way Home – Bandera, Texas
Copyright © 2009 Jeff Lynch Photography
Shot taken with a Canon EOS 5D Mark II set on aperture priority (Av) using an EF 24-105mm f/4L IS USM lens hand-held. The exposure was taken at 24mm, f/11 for 1/60th of a second at ISO 100 using a Singh-Ray warming polarizer. All post capture processing was done in Adobe’s Lightroom 3 Beta. Click on the image above for a larger version. 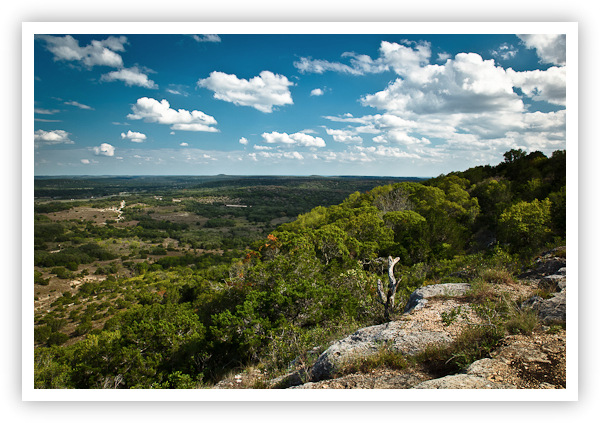 Hill Country Hiking – Bandera, Texas
Copyright © 2009 Jeff Lynch Photography
Shot taken with a Canon EOS 5D Mark II set on manual (M) using an EF 24-105mm f/4L IS USM lens hand-held. The exposure was taken at 24mm, f/11 for 1/30th of a second at ISO 100 using a Singh-Ray warming polarizer. All post capture processing was done in Adobe’s Lightroom 3 Beta. Click on the image above for a larger version.

Photo-Hiking around the Texas Hill Country on a cool autumn day is a treat for the senses and a workout for your legs. The hiking trails in this part of the state go on for miles and miles with switchbacks around every corner.

It’s easy to become disoriented and the park trail maps are fairly worthless for the most part. That’s why there are three things that a photographer should bring on any photo-hike.

Detailed topo maps are available from Garmin or on the Internet for almost every part of the globe. Some folks have even mapped out all the best photographic spots in a certain National or State Park and offer these tracks for free or for sale at very little cost. Now I’m no GPS expert but after using the Dakota 20 for navigation and geotagging my images a few times I can’t imagine going on a photo-hike without it.

Last month I was hiking in the Hill Country State Natural Area near Bandera, Texas with a good friend of mine. We’d planned this little excursion to central Texas so I could scout some nice locations for my spring workshop and arrived in the early afternoon on a cool fall day. The weather was almost perfect and though I didn’t expect to capture many good shots that early in the afternoon, this vista sort of jumped out at me! I can almost hear the coyotes in the distance… 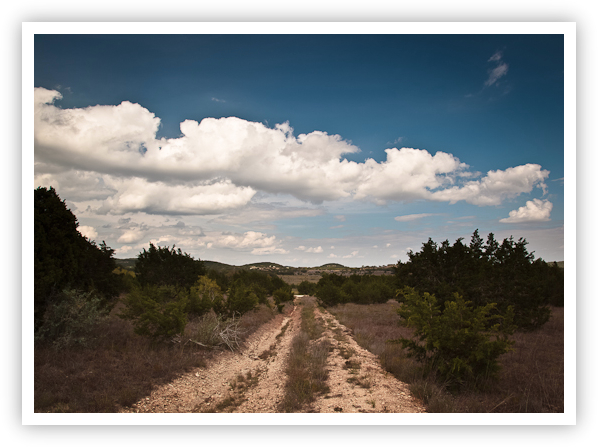 The Long Trail – Bandera, Texas
Copyright © 2009 Jeff Lynch Photography
Shot taken with a Canon EOS 5D Mark II set on aperture priority (Av) using an EF 24-105mm f/4L IS USM lens hand-held. The exposure was taken at 24mm, f/11 for 1/40th of a second at ISO 100 using a Singh-Ray warming polarizer. All post capture processing was done in Adobe’s Lightroom 2. Click on the image above for a larger version.

“Do I really need to use all these filters for my landscape shots or can I just fix them in post?”

Believe it or not, this question has been around about as long as photography has. In the days of black & white film and “wet” printing, photographers spend hours and hours “dodging and burning” their enlargements to compensate for areas of different exposure values. It was an art form at its very best. Photographers would create all sorts of dodging and burning “tools” to assist in this process and the end result could be spectacular (Ansel Adams) or just plain crap! Today we have Lightroom and Photoshop and the opportunities to “fix” an image during post-capture processing are almost limitless. 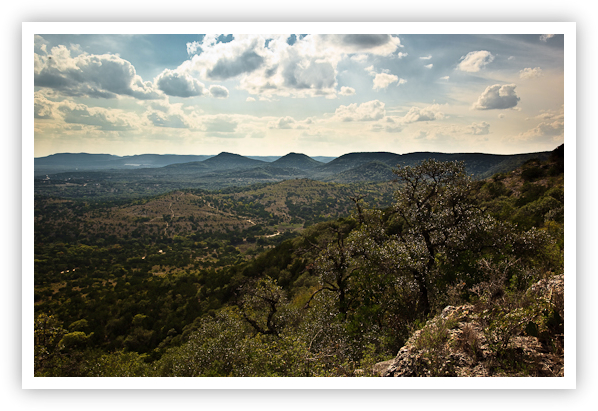 Take this image for example. I shot this a few weeks ago while hiking in central Texas. The light was pretty poor in the late afternoon sun and I hadn’t brought a graduated ND filter with me as I usually do. All I had was a circular polarizer to help cut down the haze and harsh reflections off the leaves. The scene was really breathtaking and I was disappointed that I hadn’t brought the right gear to capture it properly. 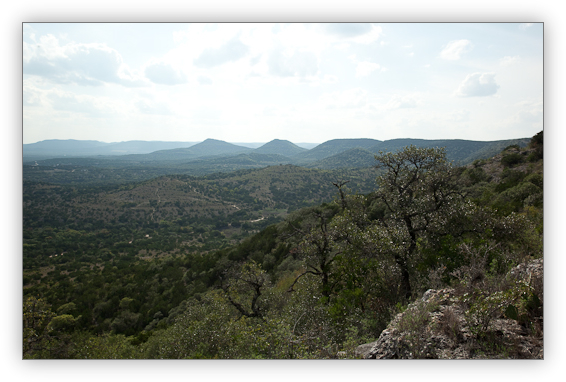 Rather than give up I setup my tripod and adjusted the Singh-Ray LB Warming Polarizer to provide the maximum amount of polarization. As you can see in the image above, it did help to reduce the glare but the difference in exposure values for the foreground and the sky was at least 3 stops. I took a few shots using the histogram on the camera’s LCD to judge my exposure. I had no “blinkies” (blown highlights) so I new I had an exposure I could work with.

My first step in developing this RAW image was to process it as I would normally do in Lightroom. I generally work on the Basic settings like Exposure, Recovery (very important), Blacks (also very important), Brightness and overall Contrast. I almost always crank up the Clarity (adding mid-tone contrast) and Vibrance (adding mid-tone saturation) and may play with these two settings for 20 or 30 minutes until I find a combination I like. 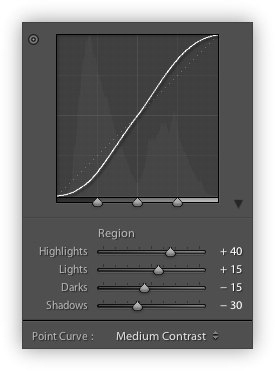 My next step was to work with the Tone Curve to adjust the Highlights and Shadows, and the Lights and Darks in the image adding much needed contrast and separation to these areas. 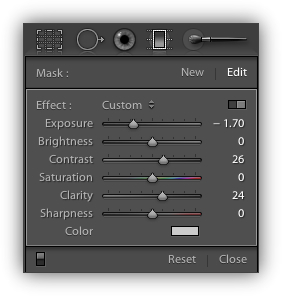 My final step was to use Lightroom’s Gradient tool to simulate the effect of using a 2-stop graduated neutral density filter as shown above. While this tool is not nearly as effective as using a real ND-Grad in the field, it does offer very granular control over other characteristics in the gradient such as Exposure, Contrast and Clarity. 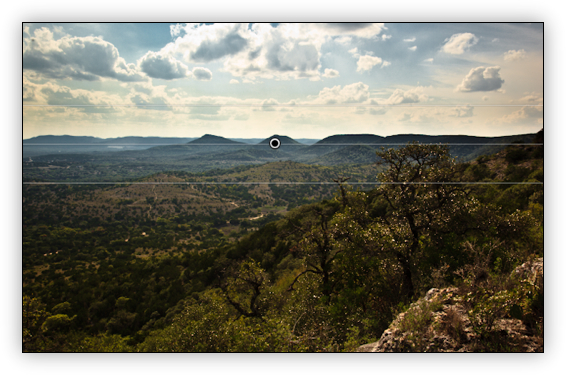 Using the Gradient Tool as a Graduated Neutral Density Filter

All in all, this image took about 45 minutes to “develop” in Lightroom and while the results are acceptable considering the original image, the amount of time spent working on this was considerable. If I’d used a graduated neutral density filter during the original exposure my post capture workflow would have taken only a few minutes and I really believe the results would have been much better.

In my opinion, making the exposure “in camera” is what photography is all about! Think of it this way; have you ever been out in the field photographing nature and thought to yourself, “I sure wish I was back home working on my images in Lightroom rather than out here with my camera”? Me neither!

I’ve travelled all over the world and visited many different countries, landscapes and terrain in my time. I’ve seen the sun rise in Beijing and set in Singapore. I’ve felt the dry, brittle cold of a winter’s day in Alaska and the cold, damp, rainy nights of autumn in Scotland. I’ve walked the quiet hillsides of the Napa Valley and the noisy streets of Hong Kong. I’ve hiked Isle Royal in the springtime and canoed Lake Placid in the fall.

Nowhere I’ve ever travelled has felt more like “home” to me than the Texas Hill Country. Drive a few short hours from Dallas, Houston, San Antonio or Austin and you can find yourself in a region like no other on Earth. A place of contrast, beauty and solitude where the sky stretches almost to heaven. A place you can climb and gaze for miles and miles and see no sign of civilization. 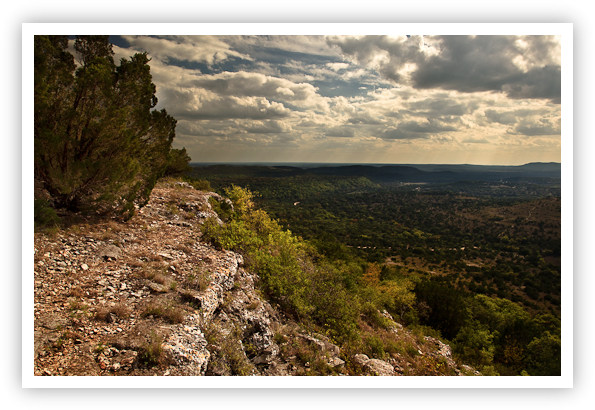