Landscape photography in Texas is an endurance sport, especially for your vehicle. The best locations are far from any major cities and in many cases, far from civilization itself. Having a dependable ride like the Subaru Forester is essential to your success and your survival.

My 2010 Forester has a little over 103,000 miles on it and still runs like a champ. I’ve taken it all across Texas from Houston to Amarillo, Dallas to El Paso and Harlingen to Nacogdoches with not a single breakdown to its credit. We’ve traveled the dirt roads of Big Bend National Park, the two track trails of Guadalupe Mountains National Park, the back roads of twenty different Texas State Parks and the dirt roads of over 150 Texas counties.

Man, what a ride!

I have two topics on opposite ends of the spectrum to present and discuss this morning. The Bad with the Good.

The first is to showcase a beautiful part of Texas that I’ve come to love during my recent travels. As many of you know, I have a deep and abiding respect for the Texas Hill Country and a sincere appreciation of the simple beauty found in these rolling hills and dry valleys. The Hill Country is a part of Texas that calls to me in a way few places I’ve visited ever do. If I’m away for more than a few months, I find myself almost inventing reasons to visit once again.

The second topic has to do with yesterday’s news that an “alleged” Saudi terrorist with extremest Islamic views was arrested in Lubbock, Texas not far from where my daughter attends school at Texas Tech. According to the FBI, this Saudi national sought to use weapons of mass destruction to harm former President George W. Bush as part of his personal “jihad”. The terrorist in question was in the US legally, posing as a student.

Living close to a large city like Houston, we are used to hearing about gang violence, the Mexican drug cartels operating in our state and the potential for terrorist activity here in the heart of America’s refining and petrochemical industry. Living in close proximity with almost 5 million other people, we have become accustomed and somewhat desensitized to the level of personal risk we face every day.

As a husband and father of four daughters, I take the responsibility to protect my family very seriously and news that an “alleged” terrorist was hiding in plain sight in Lubbock, struck fear into me like nothing else could. For me, this terrorist plot was much too “close to home” and brought back that terrible feeling of helplessness that I first experienced on September 11, 2001. Having a terrorist living in our great state, enjoying the beauty of the Texas plains and canyons and “allegedly” plotting to kill President Bush knocked me to my knees. That this Islamic extremist lived in the same town as my daughter made me more fearful and angry than I’ve been since 9/11.

Which is exactly what I believe a terrorist hopes to accomplish with his “jihad”, to make average American citizens despair. This is what evil does to those that would oppose it. And yes, I said “evil”, because that is what we face. This is not a deranged, mentally unstable individual that wanted to lash out indiscriminately, this is an evil that came to our country and our great state with one single objective, to create terror in his quest for “jihad”. There is nothing holy in this person’s holy war. There is only evil.

My sincere thanks to the men and women of the FBI, the Texas Rangers and all the other LEOs in our great state that work tirelessly to protect all our sons and daughters!

“Do not be overcome by evil but overcome evil with good” — Romans 12:21

I love hiking at Lost Maples State Natural Area near Vanderpool but I rarely get out there during the fall because the crowds (of very nice folks) make it tough to get good shots. Hiking during the spring or summer is a real treat and you can explore up and down the Sabinal river valley for hour after hour and never run into another person. It’s a beautiful walk through some of the most picturesque Hill Country landscape you’ll ever see. And for you birder watchers, it’s cool to see all the hummingbirds zooming around the place.

Low Water Crossing on the Sabinal – Vanderpool, Texas
Copyright © 2010 Jeff Lynch Photography
Shot taken with a Canon EOS 5D Mark II set on aperture priority (Av) using an EF 24-105mm f/4L IS USM lens hand-held. The exposure was taken at 24mm, f/11 for 1/45th of a second at ISO 100 using a Singh-Ray warming polarizer. All post capture processing was done in Adobe’s Lightroom 3 Beta 2. Click on the image above for a larger version.

Each autumn, thousands flock to Lost Maples to admire the beauty of the fall colors in a location many have come to think of as Vermont in Texas. Unfortunately, the extremes of heat and drought this year have taken their toll on the trees at Lost Maples and it looks like the colors this fall may be short lived.

According to the Texas Parks & Wildlife folks…

“This summer’s record heat and historic low rain fall has put the trees through their roughest test since weather records have been kept for this area. Due to the extreme heat and dryness this summer we are seeing a change in many of the trees already, about six weeks early. The change is stress related from the heat and dry weather. Many of the black Walnuts are turning yellow and dropping their leaves. Some of the smaller Maples have turned already due to the heat and dry weather. It has been a very rough year for the trees, as we had two storms this summer, one on June 30 and another two weeks later that had small tornados. We lost several very large Red Oaks in these storms, and one huge Cherry tree. Most of the tree varieties are showing some heat stress. Most of the very large Maples seem to be doing well and the ones back on the trails are doing good as they are close to the river and still getting some water.”

I visited this beautiful park a few weeks ago and found the Sabinal river to be almost bone dry. I’m hoping to get back there later this month if I can find the time. For now, I’ll have to content myself with the few nice shots I took one cloudy morning. 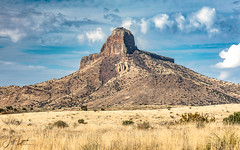