I was honored to be included in this wonderful book which contains a ton of great information for anyone wanting to take better photographs with their G10, G11 or G12 camera.

There are also over one hundred spectacular photographs included in this book from amateur and professional photographers across the globe and this alone makes it a “must read” for anyone owning one of these cameras.

As you would expect, most of my images are featured in Chapter 7 – Landscape Photography and the shot below (taken at Palo Duro Canyon) was used as a two-page spread to open the chapter.

Now that I’m done bragging, I’d really like the thank Jeff Carlson and the folks at Peachpit Press for once again including me in their projects. You folks rock!

The folks at Peachpit Press are truly incredible and have treated this old Texas photographer like royalty. I’ve been honored to have my work featured in Jeff Carlson’s book from Peachpit Press, Canon Powershot G10/G11: From Snapshots to Great Shots and in his upcoming book on Canon’s Powershot G12.

When Sara Jane contacted me for an interview about my photograph entitled “Touchdown” I was tickled pink. It’s not every day that a guy like me gets interviewed along side the likes of Mark Krajnak (The K-Man from the Hot Shoe Diaries) and world famous wildlife photographer, Moose Peterson. Face it. The only thing Joe McNally and I have in common is our Irish heritage and the time he dated my younger sister at Syracuse (just kidding Joe). 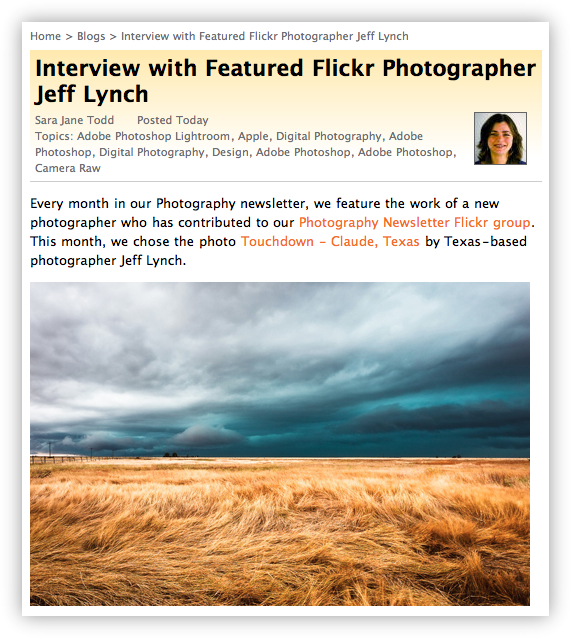 So here’s to you Sara Jane, Jeff, Valerie and Scott! Many thanks for making my week a bit brighter.

Jeff Carlson’s latest book Canon PowerShot G10 / G11: From Snapshots to Great Shots has just been released and is available from Amazon or Peachpit Press right now. Jeff’s books contains three of my favorite G10 landscape images which were chosen from the hundreds submitted to Peachpit’s Flickr group created just for this book. The first person to buy the book and find my three images gets a free copy of my new photo book Hill Country Landscapes.

By the time you’re reading this I should be well on my way to the Texas Hill Country preparing for Sunday afternoon’s kickoff of the Texas Landscape Safari in Lampasas, Texas. The weather forecast is almost perfect with highs in the low 70’s and lows in the upper 50’s. Autumn has finally come to Texas!

It’s going to be a busy week with the workshop and getting some final images for my upcoming book. I’ll also be shooting an entire set using my Canon G10 for inclusion in Peachpit Press’s new Flickr group: Canon G10/G11 From Snapshots to Great Shots! Many thanks to Scott Cowlin for the invite!