Pedernales Falls State Park is one of my favorite spots in all of Texas. Its unique geological structure, colorful foliage and shear size make it a target rich environment for landscape photographers. You could spend weeks exploring each tier of the falls and never see the same thing two days in a row. The water level varies greatly depending upon how much rainfall the area has gotten and this section of the river is prone to flash floods.

My favorite times of year to visit is in the early spring and the late fall when the sunrise and sunset are aligned with the top of the falls. As you can see in this image, the clouds at sunset can be spectacular.

In fact, I generally start off my lectures by telling everyone to forget the rule of thirds. The looks I get when making this simple statement are amazing. From abject horror to tearful sorrow. It never ceases to amaze me how entrenched an idea can become if it’s repeated enough times. I honestly never understood the rule of thirds and after 35 years of shooting it’s way too late to learn.

What I do try to teach folks is to understand how the human mind “sees” an image. How the proper foreground can lead a viewer “into” your image and how the proper background can keep a viewer “inside” your image. I also try to teach folks to frame their subjects in such a way that the viewer spends as much time as possible “looking around” and enjoying your image. The whole idea is to lure the viewer deeper and deeper into your image and to keep him or her there for as long as possible (usually less than 3 seconds, honest). 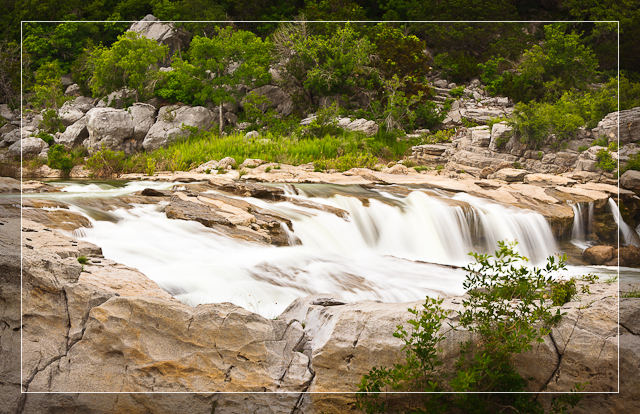 Take this shot of the upper section of Pedernales Falls for example. Last spring I walked around this section of the falls and took over 50 shots from various angles, elevations and positions. None of the compositions really appealed to me until I walked behind this large, cup-shaped boulder and small tree. Just as soon as I had framed the falls in the curve of the rocks I knew I had found the shot I wanted. The fact that the background also curved over the falls provided the symmetry I was looking for.

Now I had a nice foreground to lead the viewer into the image. The falls in the middle-ground as my main subject and the rocks and trees in the background keeping the viewer inside the shot. (Of course this all could be a figment of my 60’s delusions ;-))

I also try to teach folks that learning this stuff takes practice and that there is no “right way” or “wrong way” to compose a landscape shot. I’ll be the first to admit that upon visiting a new location, I’ll take 40 or 50 shots from various angles using different compositions and cull through them back in the office until I find the few that I like. Even though I shoot over 30,000 exposures in a year, my overall hit rate is generally less than 10%.

What’s that you say? What self-respecting photographer would use a medium telephoto zoom for “serious” landscape photography? Believe me when I tell you that these two gems in Canon’s lens lineup are darn near perfect for landscape work. In fact, most of my top selling posters and fine-art prints were shot with one of these two lenses and I’m not alone in this. Many of the most highly respected professional landscape photographers in the world today use one of these two lenses, and for good reasons.

The build quality of these two lenses is nothing less than superb and the fact that they are Canon’s smallest and lightest medium telephoto zooms makes these ideal landscape lenses in the field. The ring-type USM (ultra-sonic motor) focuses very fast and silently. Both the focus ring and zoom ring are firm to the touch and spaced apart enough not to interfere with one another in use. The zoom function is completely internal (the barrel does not extend) and the focus is the same. Again, both of these features are ideal for landscape photography. The image quality from this lens is nothing less than superb and the optical design features a fluorite element and two ultra-low dispersion (UD) (ultra-low dispersion) glass elements.

However, the best feature of these two incredible landscape lenses is the price. At $600 (USD) for the standard version and only $1200 (USD) for the image stabilized version, they are less than half the price of their much more expensive cousin the EF 70-200mm f/2.8L USM II, priced at $2300 (USD). Yes, the EF 70-200mm f/2.8L USm II is one full stop faster, but when was the last time you took a landscape shot with a wide open aperture? I generally shoot landscape shots with my 5D Mark II at f/16 or smaller to achieve the greatest depth of field possible.

Just a gentle reminder to everyone that my first book Hill Country Landscapes is back in stock and available for immediate shipment. You can preview the book below to see some of the wonderful landscapes you can find in the Texas Hill Country.

Hill Country Landscapes by Jeff Lynch | Make Your Own Book

My next book should be completed in the fall and be available before Christmas, so stayed tuned!

I’ve traveled near and far over the past 30 years and I’ve seen a lot of sunsets in my day, but nothing comes close to the simple beauty of a Hill Country sunset.

Folks, life is just too short to sit inside and watch TV every evening. Grab your camera, find a nice spot and wait for the magic to begin. Every sunset is a moment to be treasured!

Sorry about the “No Blog” Monday but I returned from a Saturday afternoon workshop to wake up Sunday with a fever and blistering headache. As they like to say around here, “If I didn’t have bad luck, I wouldn’t have any luck”.

Here’s a shot I took last month during the spring Texas Landscape Safari workshop at Pedernales Falls State Park near Johnson City, the home town of President Lyndon Baines Johnson. This is one of my favorite spots to photograph in the entire state because every visit presents me with new opportunities to shoot as river’s currents change from one day to the next. You could come here with a camera every day for a year and never get the same shot twice.

How fleeting is fame. On Friday I was the rising star of the blogosphere, having been Freshly Pressed by the folks at WordPress and watching my page views soar into the heavens. By Saturday afternoon I was back to work in La Grange and Smithville scouting locations for next Saturday’s HANPA (Houston Audubon Nature Photography Association) workshop. Sunday morning was spent paying the bills and seeing if I could use some creative accounting to stretch my cash flow once again. And by Sunday night I was furiously working to put together a proof portfolio for a prospective commercial client.

Somehow, this all seemed a lot easier in my youth. Working seven days a week seemed simple back then, when the creative juices flowed through much younger veins. When five or six hours of sleep and a cup of hot coffee was all that was needed to jump start things on a Monday morning. I think Toby Keith’s latest song hits the nail square on the head.

Sometimes I miss the old days of shooting Kodak’s Pan-X, Plus-X and my favorite, Tri-X. In many ways, photography was much simpler back then but in others, much more complicated. Shooting successfully in B&W meant paying close attention to composition and exposure and this really sharpened your eye as a young photographer.

Before I get all nostalgic, it’s important to remember how many rolls of Tri-X turned to mush during “push processing” and how many sheets of 8″ x 10″ paper I wasted before I learned to dodge and burn using the enlarger. Don’t get me wrong. It was a great way to learn your craft but boy, was it expensive compared to working in “digital” today.

Take this shot for example. Sepia toning in the 70’s took great skill, patience and a bit of luck. Today, converting a “fair” looking shot to B&W to add some drama and then creating a duotone takes all of 30 seconds in Adobe Lightroom. It’s great fun to experiment in Lightroom knowing that all edits are non-destructive and that you have infinite undo steps if you want to back-up and start over. And the cost of this experimentation is ZERO, NADA, Nothing. It’s free!